Left: Comet Churyumov-Gerasimenko is hidden within this sector of space, a crowded star field in the constellation Scorpius that is towards the center of our galaxy. The image was taken by OSIRIS’s wide-angle camera. Middle: The narrow-angle camera allows for a closer look, and shows many background stars. Right: After refined steps of data processing the comet becomes visible. (Credits: ESA 2011 MPS for OSIRIS-Team MPS/UPD/LAM/IAA/RSSD/INTA/UPM/DASP/IDA)

About 163 million kilometers and three more years separate brave little ESA spacecraft – Rosetta – from comet Churyumov-Gerasimenko. But this seemingly huge distance isn’t stopping determined scientists from the Max Planck Institute for Solar System Research (MPS) in Germany. Their target might be a million times fainter than the faintest star we can see here on Earth with our eyes, but Rosetta has them covered. It has succeeded in imaging the distant comet and it’s right on target.

Using the onboard camera system OSIRIS, Rosetta took its snapshots during testing over the last couple of weeks in preparation for its three year hibernation period. These first images of the tiny, flying space stone only covered a few pixels; “But the pictures already give us a good idea of where we are headed”, says Dr. Holger Sierks from MPS, OSIRIS Lead Investigator. “In addition, they are a remarkable proof of the camera’s performance. We had not expected to be able to create first images from so far away”.

Credits: ESA 2011 MPS for OSIRIS Team MPS/UPD/LAM/IAA/RSSD/INTA/UPM/DASP/IDA and Yuri Beletsky / ESORight on? You bet. Here on Earth we’re only able to follow Comet Churyumov-Gerasimenko with the aid of the European Southern Observatory’s Very Large Telescope in Chile, one of the world’s most powerful telescopes with a main mirror diameter of eight meters. By comparison, Rosetta’s OSIRIS camera mirror measures only approximately ten centimeters in diameter. Just like our terrestrial astrophotos, OSIRIS also needed to make a long exposure time as well – to the tune of 13 hours. “All in all, we took 52 images with OSIRIS, each exposed for 15 minutes”, explains Dr. Colin Snodgrass from MPS, responsible for data processing. Once the images were obtained, they were then “stacked” to correct for the comet’s movement against the background stars. This gave researchers their first glimpse of their final destination. 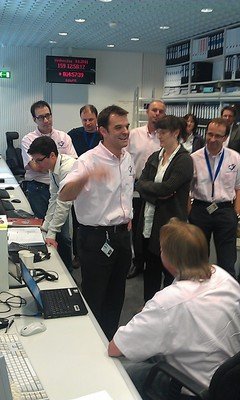 Operations manager Andrea Accomazzo gestures happily in the Rosetta control room at ESOC today, just moments after the final command was sent to Rosetta to trigger a 31-month hibernation until January 2014. Credits: ESAThe final command to put Rosetta into sleep mode was sent at 08:00 UT on June 8, 2011. The systems are now shut down for 31 months until the intrepid spacecraft nears its destination in 2014. Its instruments and control systems might be silent for awhile, but its 10 year voyage has been a huge success thus far. “With flybys of asteroids Steins in 2008 and Lutetia in 2010, Rosetta has already delivered excellent scientific results,” says Paolo Ferri, Head of ESOC’s Solar and Planetary Mission Operations Division. Rosetta is simply conserving its solar power until it reaches rendezvous with 67-P/Churyumov-Gerasimenko. But, it’s not entirely silent. The on-board computers and a few heaters are still ticking away – keeping time until its orbit takes it from 660 million km from Sol.

“We sent the command via NASA’s 70 m Deep Space Network station in Canberra, Australia, ensuring the signal was transmitted with enough power to reach Rosetta, which is now 549 million km from Earth,” said ESA’s Spacecraft Operations Manager Andrea Accomazzo. “We’ll monitor via ESA’s 35 m station at New Norcia in Australia for a few days to see if any problems occur, but we expect to receive no radio signal until 2014. Rosetta’s on her own now.”

Is there a handsome prince waiting in Rosetta’s future? Yes, in the form of a timer which will wake the slumbering spacecraft princess. When the moment arrives a signal will be transmitted back to Earth and mission control will then take command. Over a period of weeks Rosetta will “warm up” again in preparation for its landmark arrival at the distant, icy space stone. “Hibernation is a necessary step to reach the final target.” says Ferri. “We are now looking forward to 2014, when Rosetta becomes the first spacecraft to track the life of a comet as it arcs in toward the Sun.”

Previous Post: Young Supernova Has Bright Future
Next Post: Juno is on the way to Jupiter – AccuWeather.com (blog)