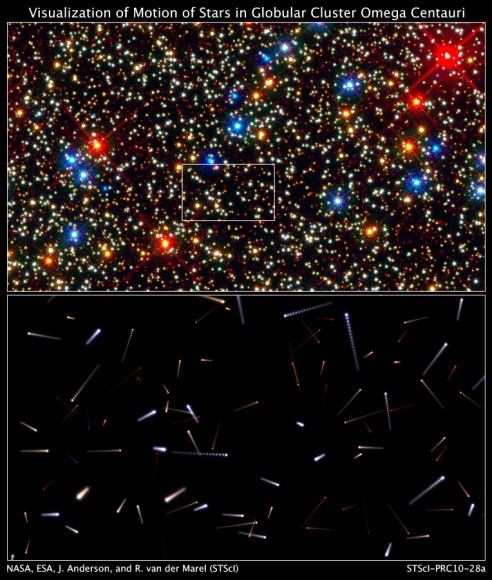 Using four years of data from the Hubble Space Telescope’s Advanced Camera for Surveys, astronomers have made the most accurate measurements of the movement of stars in the globular cluster Omega Centauri, and now can predict their movements for the next 10,000 years. This “beehive” of stars is tightly crammed together, so resolving the individual stars was a job that perhaps only Hubble could do. “It takes high-speed, sophisticated computer programs to measure the tiny shifts in the positions of the stars that occur in only four years’ time,” says astronomer Jay Anderson of the Space Telescope Science Institute in Baltimore, Md., who conducted the study with fellow Institute astronomer Roeland van der Marel. “Ultimately, though, it is Hubble’s razor-sharp vision that is the key to our ability to measure stellar motions in this cluster.”

Astronomers say that the precise measurement of star motions in giant clusters can yield insights into how stellar groupings formed in the early universe, and whether an “intermediate mass” black hole, one roughly 10,000 times as massive as our Sun, might be lurking among the stars.

Analyzing archived images taken over a four-year period by Hubble’s astronomers have made the most accurate measurements yet of the motions of more than 100,000 cluster inhabitants, the largest survey to date to study the movement of stars in any cluster.

The astronomers used the Hubble images, which were taken in 2002 and 2006, to make a movie simulation of the frenzied motion of the cluster’s stars. The movie shows the stars’ projected migration over the next 10,000 years.

Omega Centauri is the biggest and brightest globular cluster in the Milky Way, and one of the few that can be seen by the unaided eye. It is located in the constellation Centaurus, Omega Centauri, so is viewable in the southern skies, and is one of about 150 such clusters in our Milky Way Galaxy.

In this video below, astronomers Jay Anderson and Roeland van der Marel discuss their in-depth study of the giant cluster Omega Centauri.