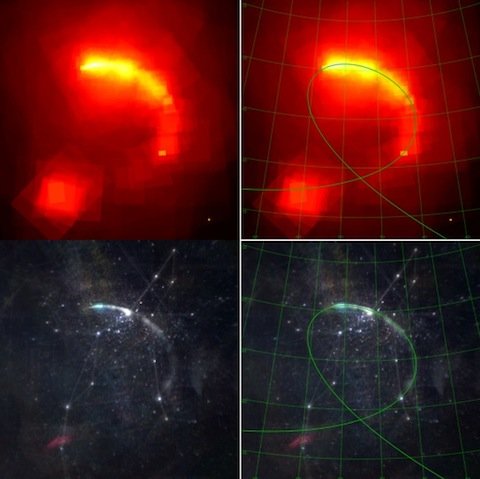 In modern astronomy, work is divided into two parts: data collection and data interpretation. The latter is something best left to professionals and academics, who don’t just have the knowledge and know-how to make sense of vast quantities of imagery, but adequate resources to process it. Photographing the night sky, on the other hand, is something that anyone with a camera and a telescope can take part in. Countless amateur astrophotogaphers around the world do just that, producing untold quantities of imagery.

Dustin Lang and David W. Hogg, of the Princeton University Observatory and the Center for Cosmology and Particle Physics, respectively, have been looking for a way for professional data-crunchers to tap into the work of amateur astrophotographers, which they suspect contains a vast quantity of useful information:

The Web bristles with billions of images: on Web pages, in public photo-sharing sites, on social networks, and in private email and file-sharing conversations. A tiny fraction but enormous number of these images are astronomical images—images of the night sky in which astronomical sources are visible… In principle these images, taken together, contain an enormous amount of information about the astronomical sky.

Of course they have no scientifically responsible provenance, have never been “calibrated” in any sense of that word, and were (mainly) taken for purposes that are not at all scientific. But having been generated from CCD-like measurements of the intensity field, they cannot help but contain important scientific information. The Web is, therefore, an enormous and virtually unexploited sky survey.

To unite this “enormous” sky survey with the kinds of people and institutions that can harness it is no easy task: the data is spread out over a large and fragmented Internet, haphazardly labeled and often of unsure provenance. Using a few publicly available tools, however, Hogg and Lang seem to have found a way to make sense of this messy data, demonstrating the ability to accurately map the orbit of the Comet 17P/Holmes using publicly posted amateur photos. Here’s how they did it:

The team used something called pYsearch, a backend tool for accessing Yahoo! search results, to search for images. They used the term “Comet Holmes,” among others. 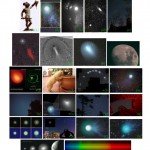 After the search results were downloaded, they were submitted to the Astrometry.com image analysis service, which matched each shot to existing maps of the night sky, effectively “calibrating” the shots. Non-astronomical images, like some of the ones seen to the right, were automatically eliminated, as were duplicates.The images’ timestamps were checked against the comet’s known location relative to other celestial bodies.The images were then stitched into a huge montage, their placement according to the area of the sky that was recorded and the time at which each image was taken.The resulting image was then used to calculate the comet’s trajectory during a specific timeframe.

The strategy appeared to work. Thousands of images–2476 to be exact–were discovered, vetted and put to use using existing software and services. Best of all, their conclusions were fairly accurate, measured against prior calculations by the Jet Propulsion Laboratory. The researchers concluded:

We have learned that you can do high-quality quantiative astrophysics with images of unknown provenance on the Web. Is it possible to build from these images a true sky survey? We expect the answer is “yes”.

The system is not without limitations. The researchers used Yahoo! search because it was the only large search engine with an API that allowed for large-scale searches of this type, but this feature will soon be eliminated. Attribution is a sticky problem as well, as the work of thousands of contributors was used to conduct this one calculation. A few were contacted and found to be receptive to their images being used for research, but the vast quantities of data used make full attribution almost impossible.

Most importantly, the scope and depth of the available data is determined not by professional astronomers with focused goals, but by thousands of hobbyists, most of whom snap pictures for fun, not to further some kind of scientific objective. In some or even many cases the interests of amateur astronomers and professional researchers will align naturally. In others, they won’t.

But regardless of these quirks there seems to be a tremendous amount of potential here. The entire paper, published in the Physics Arxiv, is highly readable and worth a look. [TR Arxiv Blog]

Astronomy is one of the few sciences that allow amatuers to participate. A large number of comets have been discovered by amatuers and the amatuers get credit for their discovery. So, yes, crowd sourcing would be effective.

Stars and star particles cannot be hidden in a lab. Thus all can still participate and really to do so on a shoestring. How wonderful that is for all of us.

The following tags are supported in Smartplanet comments: